As refugees from Afghanistan pour into the Fort Lee U.S. military base in Virginia, an imam named Ammar Amonette is leading the fundraising drive for the Afghan refugees. Ammar Amonette, Imam of the Islamic Center of Virginia, is a left-wing activist who has spoken alongside Democrat then-Governor Terry McAuliffe, worked with the state’s Democrat attorney general to push hate crime legislation, held a press conference with Democrat Senator Mark Warner, and protested President Donald Trump’s travel ban on terrorism-rich countries.

In a 2004 interview unearthed by NATIONAL FILE, Amonette discussed the 9/11 attackers, saying, “Terrorism is about symbolic targets. It’s sending a political message. The World Trade Center sounds in Arabic like ‘center for globalization.’ I think they took it literally, and globalism may be a threat. But in Islamic law, even if you have a good purpose or goal, you have to follow the rules.” Amonette previously served as imam of the Colorado Muslim Society which, during his tenure, hosted an event with then-Mufti of Jerusalem and Palestine Ekrima Sabry, who has said that it is a “fairytale” that six million Jews died in the Holocaust.

Ammar Amonette’s Islamic Center of Virginia is raising money and supplies for the Afghan refugees at Fort Lee. DiscoveringIslam.org describes Michigan-born Amonette as “an American Islamic scholar who is a convert to Islam. He spent 12 years studying in Saudi Arabia. He initially studied at Umm Al-Qura University in Mecca, Saudi Arabia. He later earned a Masters at the Graduate Institute for Preparation of Imams in Mecca.” Amonette’s efforts to help the migrants was profiled this week by CBS 6 Richmond in which he stated that “It’s going to be a long process and it’s only beginning” and said “a new plane is arriving every day” to take refugees to Fort Lee.

Here’s what you can do to help the Afghan refugees at Fort Lee pic.twitter.com/KdkOt6kvak

In June 2020, Ammar Amonette was the first speaker at a Clergy Action RVA press conference to protest the police beside the Robert E. Lee statue in Richmond, Virginia. On its Facebook page, Clergy Action RVA posts support for Black Lives Matter and George Floyd, supported giving felons the right to vote in Virginia, stated that “As last week’s insurrection at the Capitol demonstrated, the voices of white supremacy are violent and loud,” and held “Election Organizing” and “Election Brainstorming & Organizing” Zoom meetings prior to the 2020 election.

In January 2021, Amonette was quoted as saying that Muslims are not allowed to be vaccine refusers, regardless of whether or not a vaccine contains pork ingredients. He stated: “In case of an epidemic, you’re not allowed to refuse vaccination even if there’s a slight danger to you of a reaction. Although you may be able to refuse treatment when you’re ill, you can’t endanger others in the community. We have a religious duty and obligation to be vaccinated as long as competent science and medical authorities approve the vaccine…Anything that saves lives takes precedence over food prohibitions. Protecting the health of the community takes precedence over some other details of the law.”

Amonette cited the rules of Muslim law when discussing the 9/11 terrorist attacks in an October 17, 2004 interview with Denver Post reporter Eric Gorski headlined “U.S.-born imam turns heads, minds, hearts.” At the time, Amonette worked as an imam for the Colorado Muslim Society. Text of that article is preserved at the World-Wide Religious News website.

Here is a passage from the article (emphasis added): “Given his background, Amonette is in demand as a spokesman for his faith on terrorism. His answer usually goes something like this: The Islamic concept of jihad is similar to Christianity’s just- war theory, which allows war if conditions are met. In Islam it is allowable to defend yourself against armed aggressors. But Islamic law strictly forbids killing innocent civilians.

“Terrorism is about symbolic targets,” he said. “It’s sending a political message. The World Trade Center sounds in Arabic like ‘center for globalization.’ I think they took it literally, and globalism may be a threat. But in Islamic law, even if you have a good purpose or goal, you have to follow the rules.’” 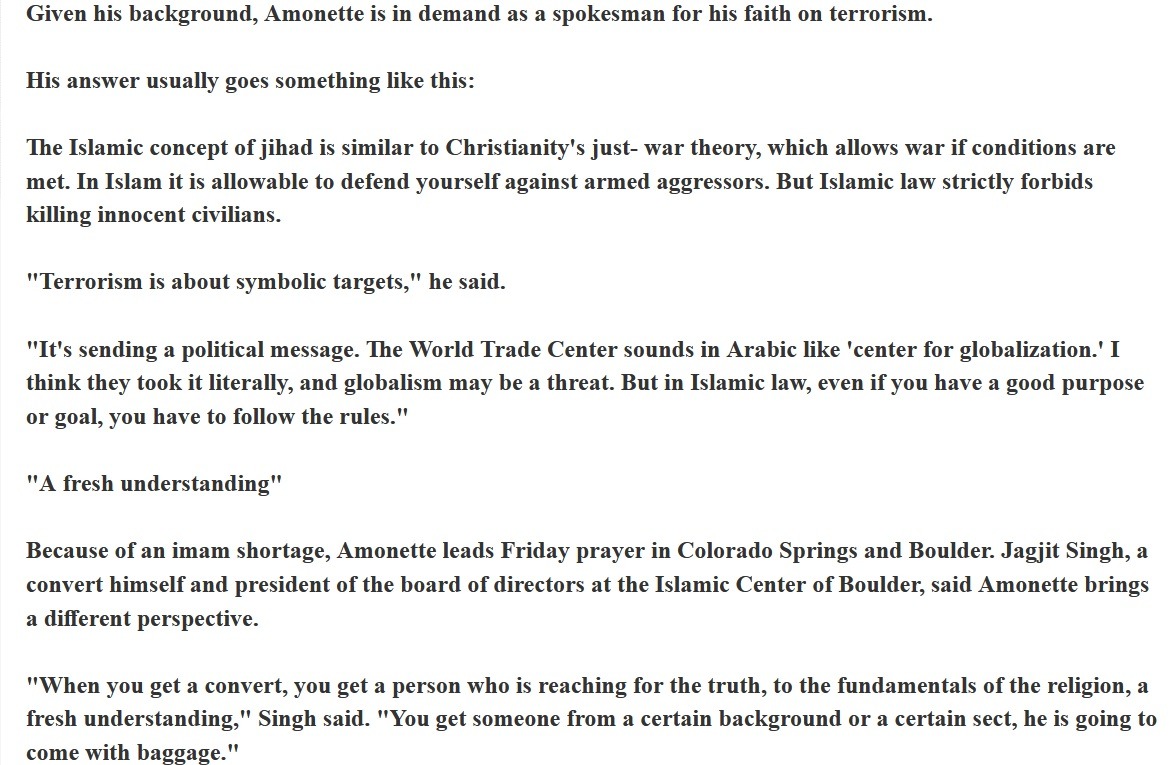 In 2017, Ammar Amonette spoke at an interfaith Ramadan potluck at Bon Air United Methodist Church with then-Virginia governor and current gubernatorial candidate Terry McAuliffe and then-lieutenant governor Ralph Northam. Amonette said at the event: “This is the real America, there’s nothing more American than an interfaith breaking of the fast where we’re not threatened by each other.”

Governor McAuliffe said at the event: “We want to be part of this very special occasion, and when you think about the holy month of Ramadan and how important that is, and the message it conveys, I want everybody to understand that from day one, our administration has fought to make sure Virginia is open and welcome to everyone. And to every member of the Muslim faith, let me be very clear on behalf of the citizens of the Commonwealth of Virginia, we love you, we respect you and we thank you for your contribution to the Commonwealth of Virginia and the United States of America.” 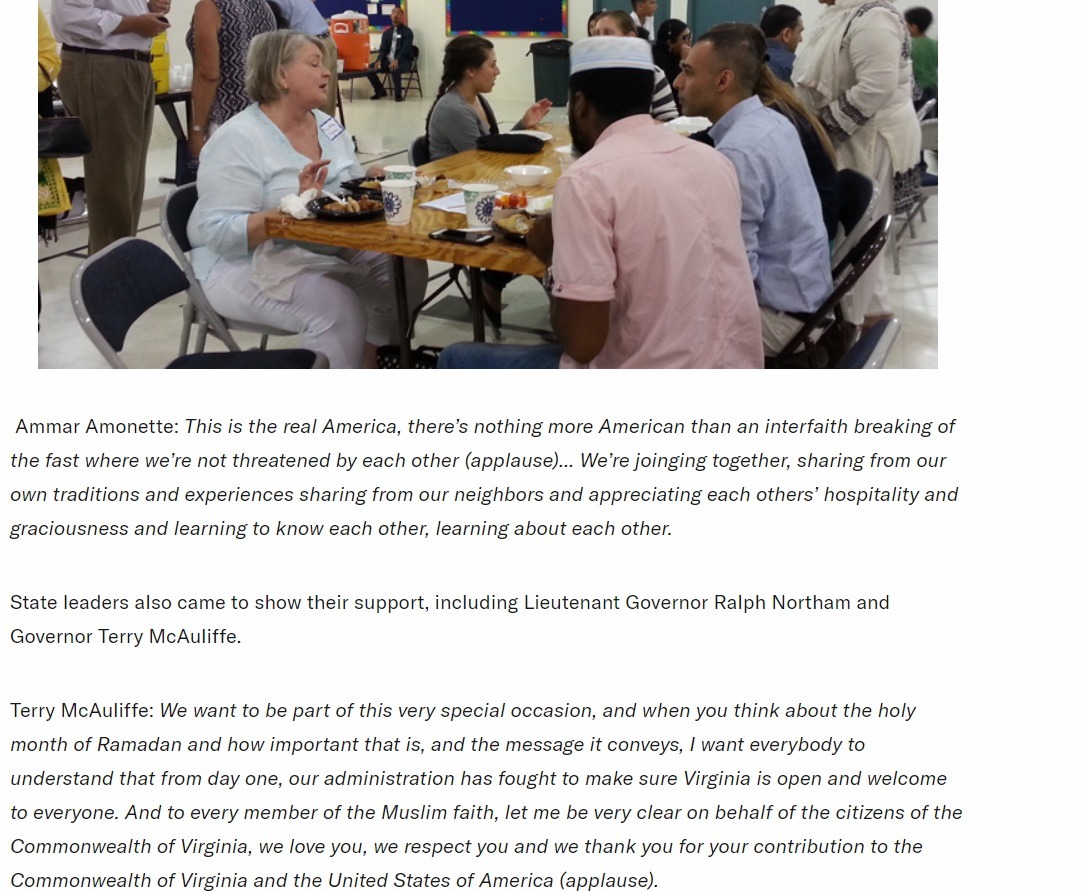 In 2004, while working as an imam of the Colorado Muslim Society, Amonette reportedly discussed how Hamas founder Ahmed Yassin’s assassination affected the Muslim community in Colorado. In March 2006, the Colorado Muslim Society (where Amonette served as imam) hosted “An Afternoon With Shaikh Ekrima Sabry,” who was then the Yasser Arafat-appointed Grand Mufti of Jerusalem and Palestine. Years earlier in 2000, Sabry said, with regard to the Holocaust: “Six million Jews dead? No way, they were much fewer. Let’s stop with this fairytale exploited by Israel to capture international solidarity. It is not my fault if Hitler hated Jews, indeed they were hated a little everywhere.” Records confirm Amonette working as an imam for the Colorado Muslim Society both before and after the event.

Amonette expounded on his views in a lecture called “The Need To Rule By ALLAH’s Law.” In his political activism from recent years, Amonette has opposed President Donald Trump. “At US Court of Appeals today protesting Trump’s Muslim Ban,” he wrote on Facebook on May 8, 2017.

In 2015, Amonette joined Democrat Senator Mark Warner for a press conference about alleged anti-Muslim hatred. In July 2018, the Islamic Center of Virginia teamed up with the ACLU of Virginia for the event #NoMuslimBanEver to fight President Donald Trump’s homeland security policy. Amonette spoke at the event. In October 2018, Amonette spoke at a vigil at the Weinstein JCC that attorney general Mark Herring and governor Ralph Northam’s wife Pamela attended. In April 2021, Amonette spoke at a Sikh event that was attended by Congresswoman Abigail Spanberger and governor Ralph Northam’s deputy chief diversity officer and senior policy adviser for immigrant and refugee affairs.

Several faith leaders joined Herring for his announcement and added their words of support to a new effort to help protect citizens of the Commonwealth from acts of violence, harassment, discrimination or intimidation…Iman Ammar Amonette of the Islamic Center of Virginia in Bon Air, said that “we support everyone’s First Amendment rights, but hate speech emboldens some people to take matters into their own hands and to attack and assault and harass people. Most Muslims have probably been targeted by hateful speech and these incidents are underreported. We appreciate the Attorney General’s strong words and actions to protect us here in Virginia to make people feel safe and welcome and equal citizens under the law.’” (Virginia Interfaith Center for Public Policy passage ends)

The Virginia Interfaith Center for Public Policy’s “Foundational Partners” include the Center for American Progress, a George Soros-funded leftist group.