Stew Peters, the America First radio host of Patriotically Correct, has refused a contract from a major radio network he says fields talent that is “watered down” and “compromised”, taking a stand for independent journalism as major corporations continue to exert control over the airwaves.

“I don’t want to be one of these watered-down radio hosts whose content is dictated for them by somebody like a Salem Media Group or the Top Brass at the Republican Party,” Peters told National File. “I will always remain true to my message, true to America first principles, and signing on with some of the larger radio groups nationally would absolutely compromise the legitimacy of my message.”

“I will never sell advertising for BigBox sell-out Coronavirus corporations like Coca-Cola or Walmart or Delta or United who are in bed with China and working every day against America,” said Peters. “If that means I have to work harder and grow my audience more slowly, we will.”

Instead, Peters says he will remain affiliated with Red Voice Media. They reported, “It’s incredibly important, especially in a time like now, that we don’t bow to these compromised networks to fall in line with mandated narratives for the sake of their enrichment.”

Peters doubled down in a post written on Gab, where he said “There’s no amount of ‘instant money’ that will shut me up or make me ‘exclusive’ to the watered down narrative of deception and half truths.” 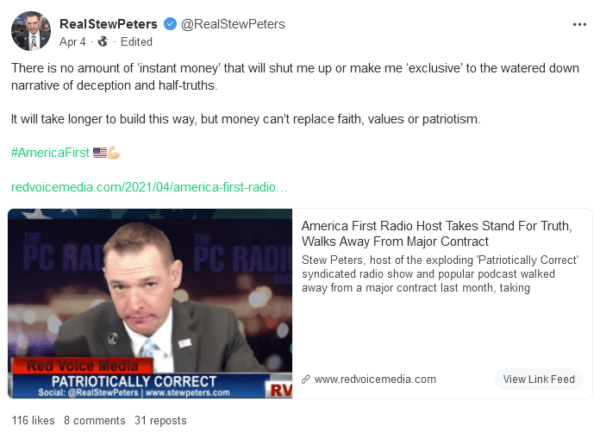 “I can’t feel good about endorsing products made outside of the United States, or even more importantly, supporting corporations that are succumbing to the pressure of politically correct lies and the ‘woke’ movement,” Peters continued, “We’re looking to rise up unashamed to proclaim our faith, love for country and family values because I believe strongly in those things.”