The American Jewish Congress was roundly defeated in their own Twitter poll, with fewer than 8% of respondents claiming it was not acceptable for elected officials to use Gab.

The American Jewish Congress, a leftist organisation that claims to be an advocacy group to help advance the rights of Jewish Americans, is maintaining their war on Gab, the free speech social network, for daring to host uncensored political speech on their platform.

National File reported earlier this month on a press release from the AJC, which claimed that popular America First Representative Marjorie Taylor Greene’s use of Gab, the free speech social media network, to raise money from her supporters is a “threat to democracy.” The group claimed, without evidence, that the platform is “favoured by Neo-Nazis, white supremacists, and supporters of the anti-Semitic QAnon conspiracy theory movement.”

“Do you think it’s acceptable for elected officials to use the Gab platform?” says a poll posted Thursday to the American Jewish Congress’s Twitter feed, with the AJC likely hoping that the free speech social network would be condemned by Twitter users. However, at the time of writing, the poll is overwhelmingly in favour of Gab. 83% out of the approximately 8,700 respondents believe that it is acceptable for officials to use Gab, with only 7.7% of respondents disagreeing. More respondents, 9.3%, actually hadn’t heard of Gab than condemned it.

Do you think it’s acceptable for elected officials to use the Gab platform? 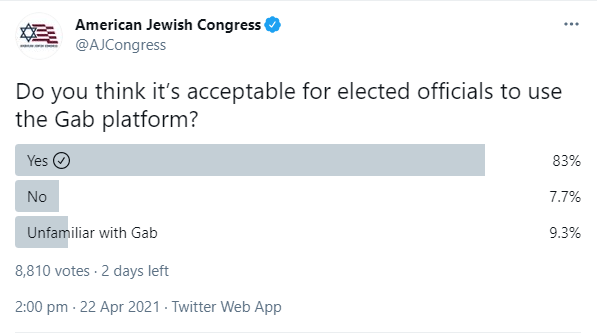 Another poll is currently running on the AJC’s site, asking not only if it was okay for political candidates to be on Gab, but also if it was acceptable for them to raise funds there, a clearly reference to Greene’s activity on the site. The results of the poll there have yet to be released. In a post on Telegram, Gab CEO Andrew Torba responded succintly to the results of the American Jewish Congress’s Twitter poll. “Rekt,” Torba said, mocking their overwhelmingly pro-Gab results.

Torba had previously responded to the smears from the AJC, noting that they have provided “ZERO evidence of ANY ‘incitement to violence’ on Gab that they claim exists here” because the site’s “zero tolerance” policy for threats results in them being removed almost immediately:

If people are discussing other topics that trigger the American Jewish Congress they are going to have to suck it up and deal with it because it’s not getting removed just because they don’t like it. Gab is a force to be reckoned with for the 2022 and 2024 political cycles. [Representative Marjorie Greene] is proof of that, which is why the Oligarchs are going to work even harder to attack Gab and shut us down.