Mike Jackson, a vehemently anti-white UFC fighter, was knocked out on Saturday after eating a brutal knee to the head.

Mike Jackson is perhaps best known for being CM Punk’s second and final UFC opponent in 2018. Punk was given a shot with the UFC despite next to no training in striking disciplines, and his career went as expected. Punk lost both of his UFC bouts, once by submission to Mickey Gall (who called out CM Punk and got him into MMA), and once to Jackson in an uneventful decision.

UFC President Dana White was furious with Jackson’s performance at the time, as White believed he should have easily finished the fight. The bout was later overturned to a no-contest due to a positive marijuana test on the part of Jackson.

Jackson then returned to the UFC three years later for a bout with Ireland’s Dean Barry. Jackson won that fight due to disqualification after Barry poked him in the eye.

He then took to Twitter to baselessly label his opponent as a “white supremacist.”

“F**k that dude,” Jackson wrote after Barry was cut as a result of his debut disqualification. “See, this that white fragility kicking in. F**k you, and f**k that dirty ass dean barry. Stupid snow roaches,” Jackson replied to a Twitter user who found his prior tweet to be disrespectful.

The Barry tweet was far from the only time Mike Jackson has tweeted anti-white slurs. He commonly calls people “snow roaches” and “domestic terrorists” while complaining about “white fragility.”

At least wash your dingy ass robe and hood before getting on the internet. You snow roaches stay infesting some shit. ❄️🪳 https://t.co/wR2kRxmd50

This domestic terrorist is back at it. These white nationalist and their white fragility are the reason we’re still in this dumb ass pandemic. Snow roaches, I tell you. https://t.co/POxcAHTZCN

Check out this collative of snow roaches? This is a nasty intrusion of white fragility. https://t.co/p59ye62414

On Saturday, Mike Jackson squared off against Pete Rodriguez, the latter of which was searching for his first UFC victory.

Rodriguez — known as a fast starter — pressed the attack early. Rodriguez landed a nasty body shot that hurt Jackson before pressing in for the finish. While Jackson was backed up against the cage, Rodriguez hit him with two left uppercuts before landing a massive knee to the head.

Jackson dropped after the knee, at which point Rodriguez landed two more strikes. Mike Jackson appeared to be out cold following the first-round knockout.

THAT KNEE WAS BRUTAL 😳 #UFCVegas62 pic.twitter.com/LzCnyDzPx6

Many were happy to see Jackson lose as a result of his anti-white social media presence. “The moment Mike Jackson realized calling everyone white nationalist doesn’t work in the UFC like it does on Twitter,” wrote former UFC title contender Jake Shields.

Shields had previously challenged Jackson to a boxing match, which would be next to impossible to make if Jackson is still signed with the promotion.

Mike Jackson followed up his loss by replying to dozens of Twitter users with his signature “white fragility” line. 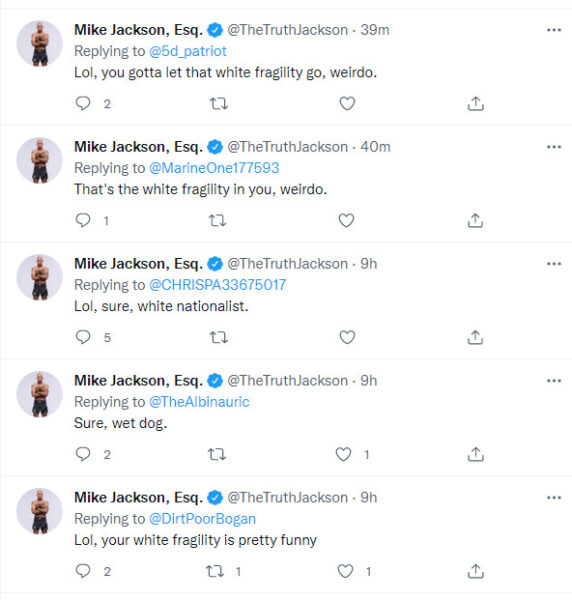