America First candidate Kari Lake joined Bret Baier on his Fox News program yesterday to discuss her run for Governor of Arizona, a pivotal border state where 2020 election fraud and massive irregularities have been exposed, contrary to the claims of Bret Baier and Fox News.

According to the findings of the Arizona election audit, the number of fraudulent or irregular ballots identified in the state’s 2020 race far outnumber Joe Biden’s reported margin of victory in Arizona. In the wake of the documented fraud, lawmakers nationwide have called for a series of election audits similar to or going further than that of Arizona. All the while, Fox News and other corporate media outlets have remained in lockstep with the political establishment in opposition to the election integrity movement.

After vowing to protect the lives of the unborn as Governor, Kari Lake turned her attention to what she says are the most important election issues facing Arizonans in 2022, calling out the Biden Administration’s blatant opening of America’s southern border.

“We have a wide open border, we have fentanyl pouring in, we have the cartels with operational control,” Lake told Baier, going on to later call the ultra-lethal drug fentanyl a “weapon of mass destruction.”

“But that wouldn’t be happening if we would have fair, honest elections,” Lake said. “And we had a fraudulent election, a corrupt election, and we have an illegitimate President sitting in the White House, and because of that, our border is wide open.”

Expanding on the issue of election integrity and pushing back against Baier’s dismissal of the evidence, Lake walked the host through some of the jaw-dropping election irregularities uncovered in Arizona, calling it a “mountain of evidence.”

“Here’s what we have,” said Lake. “740,000 ballots that have no chain of custody. They cannot be authenticated and they should not have been counted. 34,000 ballots that were counted 2, 3, and 4 times. People who moved who still voted in our election. There’s a mountain of evidence and I wish that the corporate media would cover it instead of putting their head in the sand and pretending it didn’t happen.”

When Baier found himself unable to dispel Lake’s documented allegations of election fraud, he turned to citing a Washington Post report tying Lake to an Arizona drag queen who she says she’s currently pursuing legal action against, prompting Lake to absolutely roast him.

“Do you care to address that?” Baier asked Lake.

“I do care,” said Lake. “I actually do care to address that and I’m really shocked. I’m actually appalled that Fox News would take a defamatory story like that – and we are pursuing legal action against this drag queen. I’m appalled that you would bring that up when you have not talked about our stolen election,” Lake said, calling out Baier for quickly changing the topic of discussion.

“I’m really disappointed in Fox,” Lake went on to say. “I thought you were a little better than CNN.”

After Kari Lake’s roasting of Bret Baier, 45th President Trump, who has endorsed her campaign for Governor, praised her in a Truth Social post, saying that she’d “absolutely destroyed” the host.

“Arizona Gubernatorial Candidate Kari Lake was absolutely fantastic in her interview with a very unfair Bret Baier on Fox News,” wrote President Trump. “She absolutely destroyed him on the subject of the 2020 Presidential Election Fraud and “Irregularities.” It is a MUST WATCH, she will never be invited back, and he wanted to get off that subject as quickly as possible – had no answers. Kari is the kind of tough minded and smart person our Country needs if we are ever going to be great again! 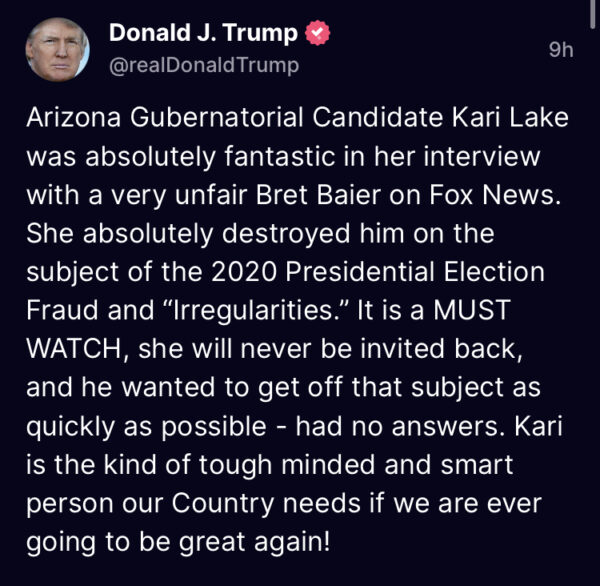