As was previously reported by National File,a man identified by media as Ray Roseberry, a North Carolina man who is currently threatening to detonate an explosive device outside the U.S. Library of Congress, went live on Facebook to discuss his motivations. While Facebook predictably deleted the video and Roseberry’s account, an excerpt of the live stream reveals that the man identified as Roseberry ranted about Biden’s disastrous withdrawal from Afghanistan.

It appears that people online believe that something else may be afoot as the DC standoff continues. As the situation unfolds, “False Flag” is trending on Twitter. “Pro tip: running false flag events when nobody trusts you and are wise to your previous hoaxes is not a good success strategy,” tweeted one user.

“What is happening in DC today I am willing to bet is a false flag operation. Only thing now is how they swing it. Big Gov “saves the day” and distracts us from the international issue that plagues this Admin. Or they kill off the guy & continue to blame all conservatives are bad,” tweeted another user. 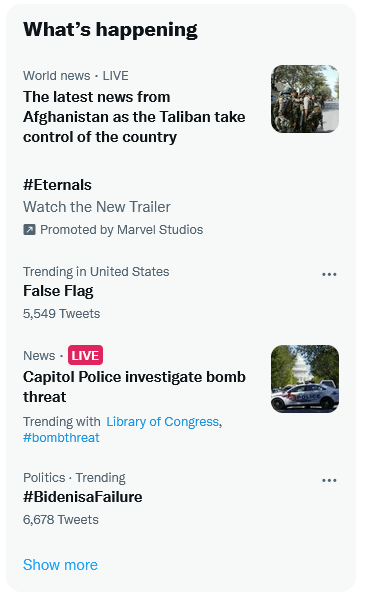 Remember, since Liberals shut down insane asylums and declared mental illness to be normal, this country has unlimited supply of insane that could be recruited by our “national security” into False Flag operations.

This story is developing.