A Washington Post contributor has declared that keeping kink in Pride parades is “okay,” even when children are present, sparking massive social media backlash.

Lauren Rowello, a current contributor for The Washington Post, wrote an article where she defended the practice of massively gratuitous displays of a sexual nature at Pride, also known as “kink.” Her article faced major backlash across social media after she dragged her children to a Pride parade.

Keep kink in Pride for our kids’ sakes! My latest for the Washington Post. #Pride2021 #kinkpositivity https://t.co/mWHveu1EKR

“When our children grew tired of marching, we plopped onto a nearby curb. Just as we got settled, our elementary-schooler pointed in the direction of oncoming floats, raising an eyebrow at a bare-chested man in dark sunglasses whose black suspenders clipped into a leather thong. The man paused to be spanked playfully by a partner with a flog,” Rowello wrote.

“What are they doing?” my curious kid asked as our toddler cheered them on. The pair was the first of a few dozen kinksters who danced down the street, laughing together as they twirled their whips and batons, some leading companions by leashes. At the time, my children were too young to understand the nuance of the situation, but I told them the truth: That these folks were members of our community celebrating who they are and what they like to do.”

Not only did Rowello’s tweet get more comments than likes (commonly referred to as being ‘ratio’d’ due to unpopularity) but prominent conservative figures spoke out against her. Conservative commentator, Matt Walsh, tweeted about the article and said that Rowello should be put in prison. Allie Beth Stuckey, conservative podcaster and author, tweeted “What logical or moral obstacle stands in the way of progressives openly celebrating pedophilia?”

You should be in prison https://t.co/nVSAeSoXhX

Honestly, the title of this piece should really be “ I have no personal boundaries and I’m definitely raising my kid to have major hang ups about sex that will ruin all of their relationships.” https://t.co/ZS5QeBUskd

So, now that showing little kids “kink” at pride is apparently mainstream enough to be written about in WaPo, can someone on the left tell me at what point the slippery slope stops? What logical or moral obstacle stands in the way of progressives openly celebrating pedophilia?

Is this an open confession of being a pedophile? Serious question. If you’re promoting the sexualization of children, you AND the @washingtonpost should be in serious trouble for this. https://t.co/wAbFHFQaeM

National File reported in March that Twitter had banned former Delaware Senate candidate and conservative commentator Lauren Witzke for using the word “demonic” to describe the words of transgender activist Alok Vaid-Menon. Vaid-Menon had declared that transgender women and young girls should use the same restroom because “little girls are also kinky.” 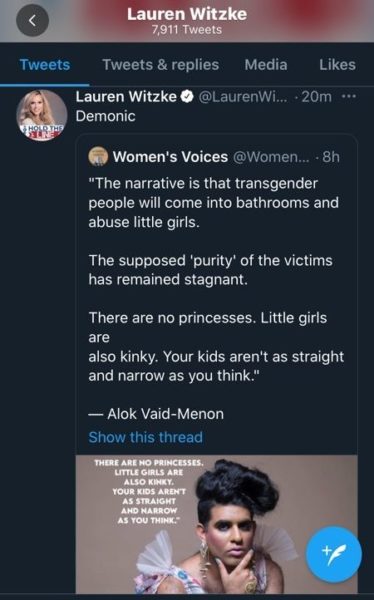