NATIONAL FILE spoke to an active duty high-ranking Naval officer who revealed that U.S. Navy chaplains in the leftist Navy chaplain program are actively blocking sailors’ religious exemption requests for the controversial COVID-19 vaccines. Chaplains are supposed to serve as military religious ministers, but the chaplain system has become increasingly left-wing. The Joe Biden regime has inflicted a vaccine mandate upon the U.S. military, and the clock is ticking for America’s active duty servicemembers to try to get exemptions from the vaccine mandate.

The Naval officer told NATIONAL FILE: “I am actively pursuing a religious exemption from the COVID jab. I did my preliminary interview with a chaplain, and he told me that for the past 3 years the Navy has allowed only 1 vaccine exempted sailor in the entirety of the Navy for religious purposes, and that was the Chaplain I was interviewing with. Only 1 person! All the rest were denied.”

“No specific reason given, just due to mission. He said that from the insight he was given, the Navy is essentially saying they have the ability to give a religious exemption as lip service to placate constitutional believers and followers! How ridiculous! There really is no intention of allowing COVID exemptions! They are merely broadcasting an illusion that exemptions exist! Sort of like the illusion that the vaccines will cure the pandemic” He added, “FYI, my command is pushing the shot HARD right now. They are talking about disobeying direct orders and NJP (non judicial punishment) if not done in the next 2 weeks! Why the rush?”

NAVY DOCUMENT 1 from August 15, 2020 is entitled “IMMUNIZATION EXEMPTIONS FOR RELIGIOUS BELIEFS.” The document states that a commander can suspend a religious exemption “if necessary due to an imminent threat to health or safety.”

The chaplains have to approve religious exemption requests: “Content of Commander’s Endorsement. In line with reference (b), COs must endorse every request for religious accommodation through waiver of immunization requirements. The content of the endorsement must include: a. An endorsement from a military chaplain in line with reference (d), b. A recommendation to approve or disapprove the request, c. Relevant information concerning the applicable operational or regional policies, d. Negative effect (if any) on mission accomplishment (i.e., military readiness, unit cohesion, good order, discipline, health, and safety), e. The number of Service members in the command that have been granted a similar exemption for non-religious purposes…” 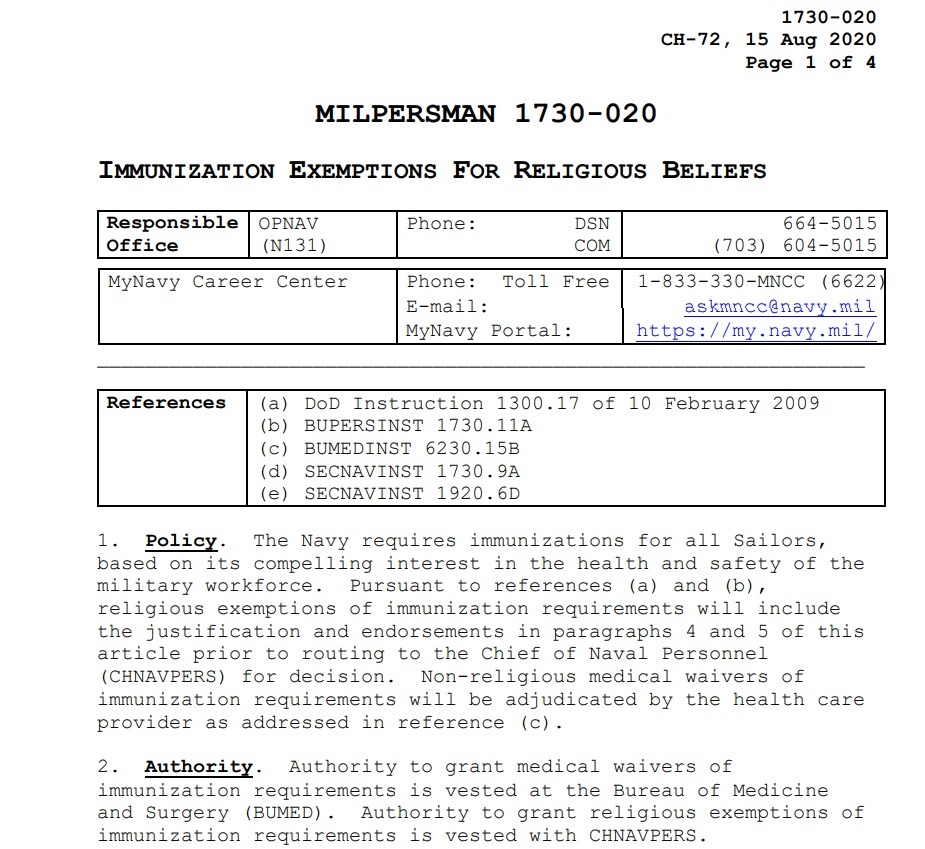 Sailors who want the religious exemptions have to undergo “Applicant Counseling” which coaches them on “The additional risk to health on exposure to disease against which the applicant will not be protected by a military physician who informs Service member of disease concerned, and benefits and risks of vaccine;” and “The possibility that the applicant may be detained during travel across international borders due to international health regulations” and “The possibility that individuals granted such exemptions may have their waivers revoked if they are at imminent risk of disease (e.g., exposure to anthrax, measles, cholera, etc.) or due to international health regulations.”

The Navy also makes it clear that “COs may, without prior approval, revoke a Service member’s authorized immunization waiver in the event of imminent risk of disease due to exposure or as a result of international health regulations incident to foreign travel.” 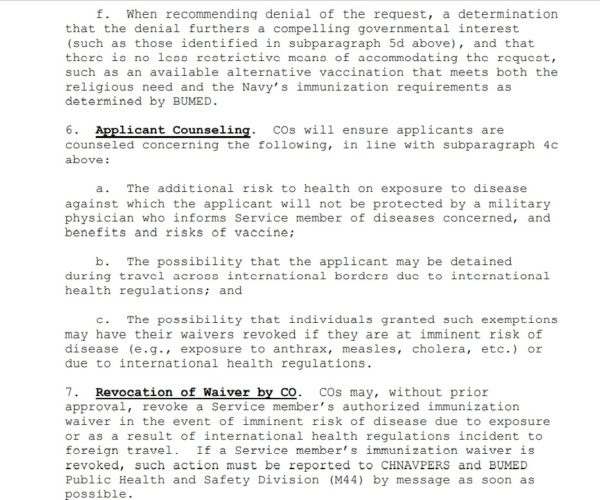 Of course, the Navy threatens severe punishment including court martial against vaccine resisters who get their applications denied. 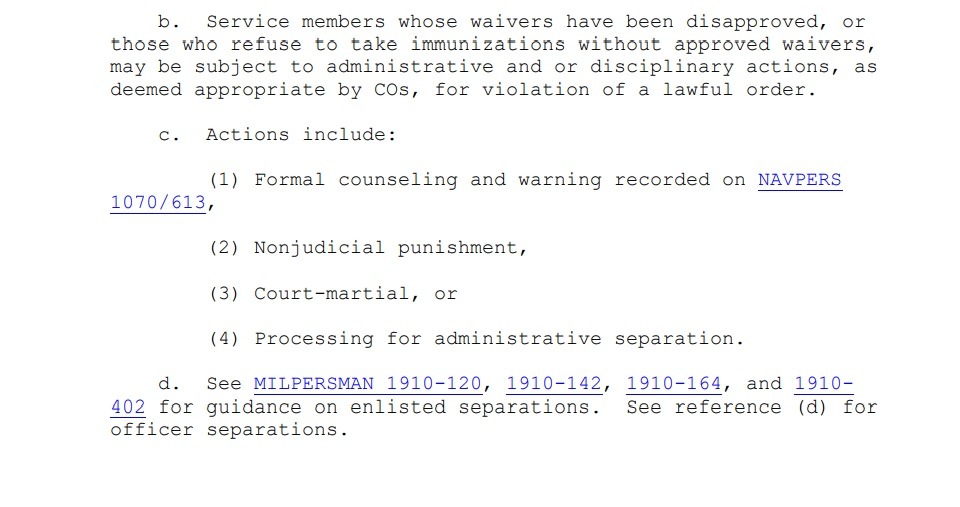 NAVY DOCUMENT 2 comes from Department of the Navy, Chief of Naval Personnel in Arlington, Virginia, and is dated March 16, 2020. The subject line is “STANDARDS AND PROCEDURES GOVERNING THE ACCOMODATION OF RELIGIOUS PRACTICES” 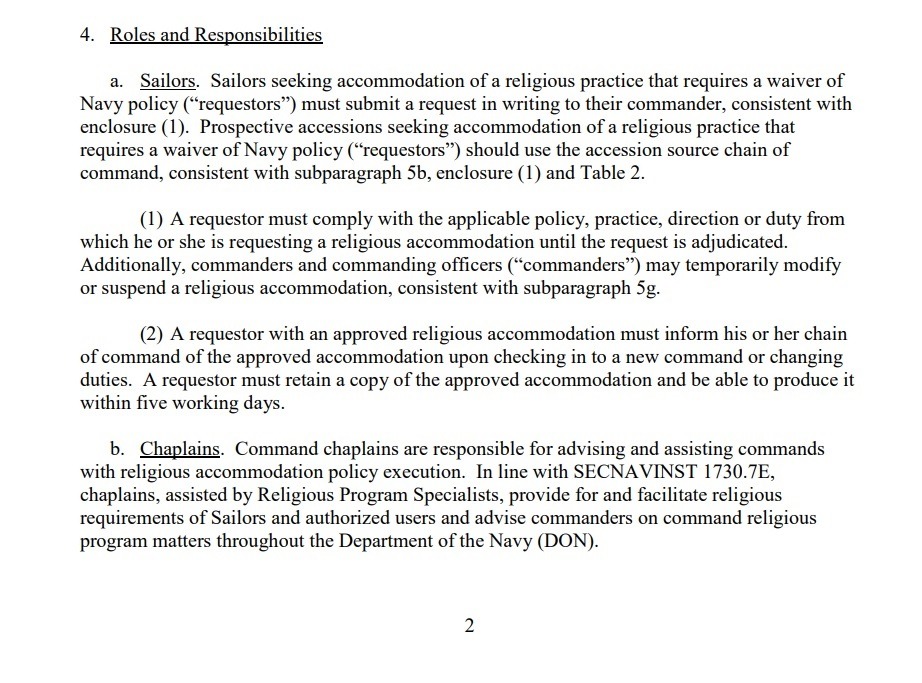 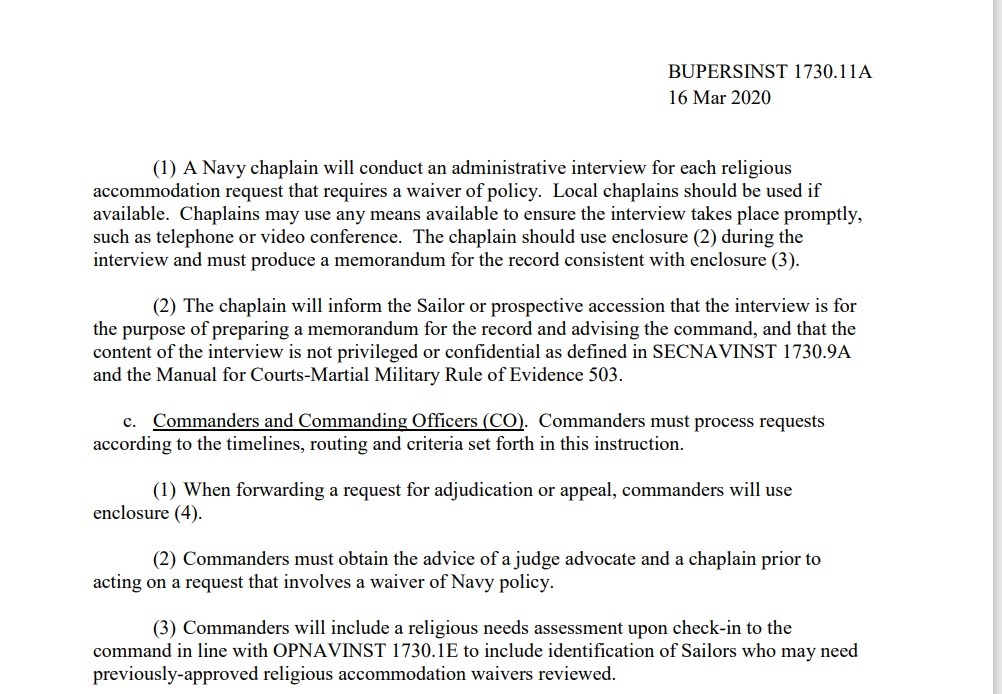 The Navy makes sure to say “Many religious practices do not require an exception to Navy policy and can be accommodated at the command level.”

“Administrative and Disciplinary Actions a. In line with reference (a), Service members submitting requests for religious accommodations will comply with the policy, practice, or duty from which they are requesting accommodation, unless or until the request is approved. b. Service members whose waivers have been disapproved, or those who refuse to take immunizations without approved waivers, may be subject to administrative and or disciplinary actions, as deemed appropriate by COs, for violation of a lawful order. c. Actions include: (1) Formal counseling and warning recorded on NAVPERS 1070/613, (2) Nonjudicial punishment, (3) Court-martial, or (4) Processing for administrative separation. d. See MILPERSMAN 1910-120, 1910-142, 1910 164, and 1910- 402 for guidance on enlisted separations. See reference (d) for officer separations” 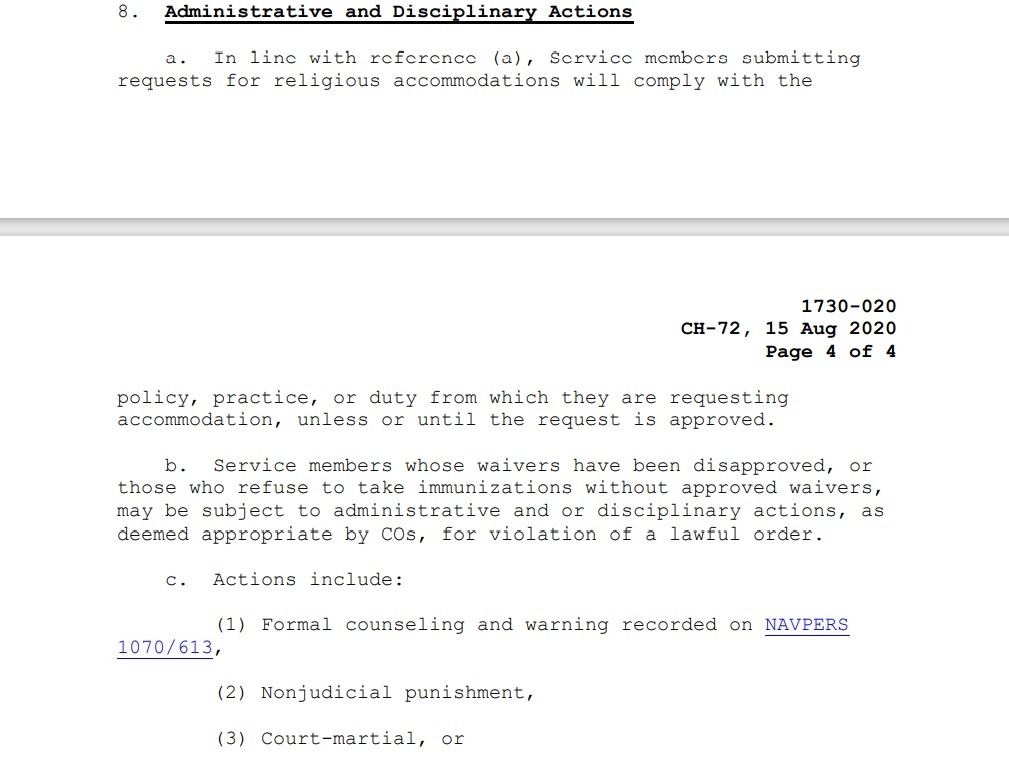