In a series of damning emails obtained by Judicial Watch, Dr. Anthony Fauci said that the “typical mask you buy in the drug store is not really effective” in stopping COVID-19, adding that the virus is “small enough to pass through the material.”

“Masks are really effective for infected people to prevent them from spreading infection to people who are not infected rather than protecting uninfected people from acquiring infection,” Fauci wrote to Sylvia Burwell, American University’s 15th president who served 11 years at the Bill and Melinda Gates Foundation, including roles as the chief operating officer and president of the Global Development Program, emphasis added by National File. “The typical mask you buy in the drug store is not really effective in keeping out virus, which is small enough to pass through the material,” Fauci continued. 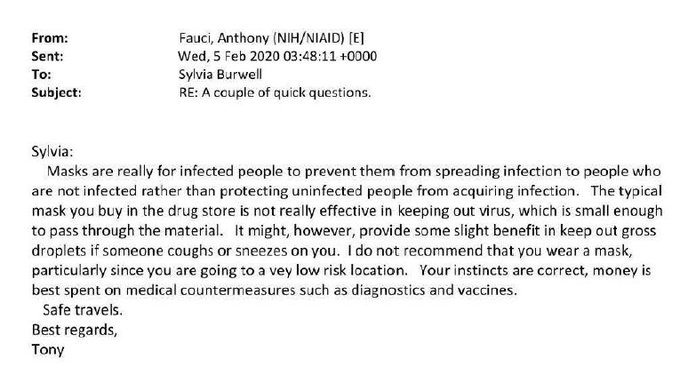 “It might, however, provide some slight benefit in keep out gross droplets if someone coughs or sneezes on you. I do not recommend that you wear a mask, particularly since you are going to a very low risk location. Your instincts are correct, money is best spent on medical countermeasures such as diagnostics and vaccines,” wrote Fauci, who in a separate email to Raymond N. DuBois, would go on to recommend that mask wearing remain “voluntary” at the Medical University of South Carolina in Charleston. 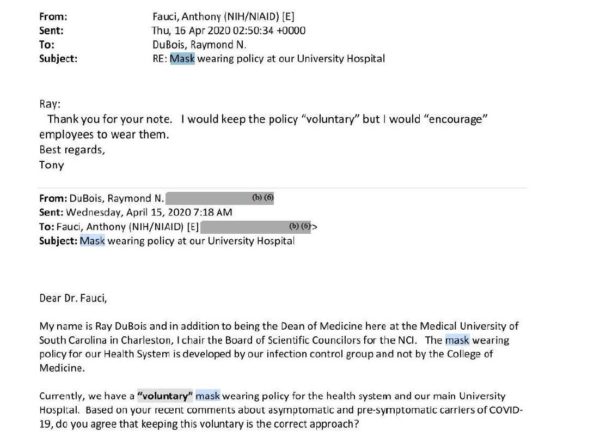 “Currently, we have a “voluntary” mask wearing policy for the health system and our main University Hospital,” wrote DuBois. “Based on your recent comments about asymptomatic and pre-symptomatic carriers of COVID-19, do you agree that keeping this voluntary is the correct approach?”

“Thank you for your note,” Fauci replied. “I would keep the policy “voluntary” but I would “encourage” employees to wear them.”

As a result of the newly released emails, Fauci’s flip-flop on the necessity of wearing masks to protect individuals from the China Virus is revealed more than ever before. In an October 2020 interview with JAMA Network, Fauci criticized states for not enforcing mandatory mask mandates, despite previously saying that the virus is small enough to pass through typical mask material.

“If you don’t want to shut down, at least do the fundamental basic things, which are really the flagship of which, is wearing a mask. And that’s the reason why we’ve gotta do, we can’t have this very inconsistent wearing that you see, where you see some states that absolutely refuse to wear a mask,” said Fauci.

“That’s the thing we have to shake each other by the collar and say ‘take a look at what’s going on, look at the data.’ It speaks for itself. We’re in a very difficult situation, and countries that have done it the other way have done it and been successful. So let’s put aside these extraordinary excuses for not doing it, when we’re dealing with a situation that’s not trivial.”

Using Fauci’s own logic, it would seem unclear how forcing healthy individuals to wear a mask “might” provide them with protection from the China Virus, given that “America’s Doctor” simultaneously claimed that the virus is small enough to get through the masks in his email correspondence.

It begs the question of why so many states in the US rigorously enforced mask-wearing with an iron fist, all while shaming anti-maskers for being “anti-science” for over a year.