Democrat presidential candidate Joe Biden’s son Robert “Hunter” Biden is the father of a love child in Arkansas that he fathered with a reported stripper in Washington, D.C., according to a court order from Arkansas Circuit Court Judge Holly Meyer.

Jonathan Turley explains: “In the order, Meyer ordered the Arkansas Department of Health to issue a birth certificate listing Biden as the father.” 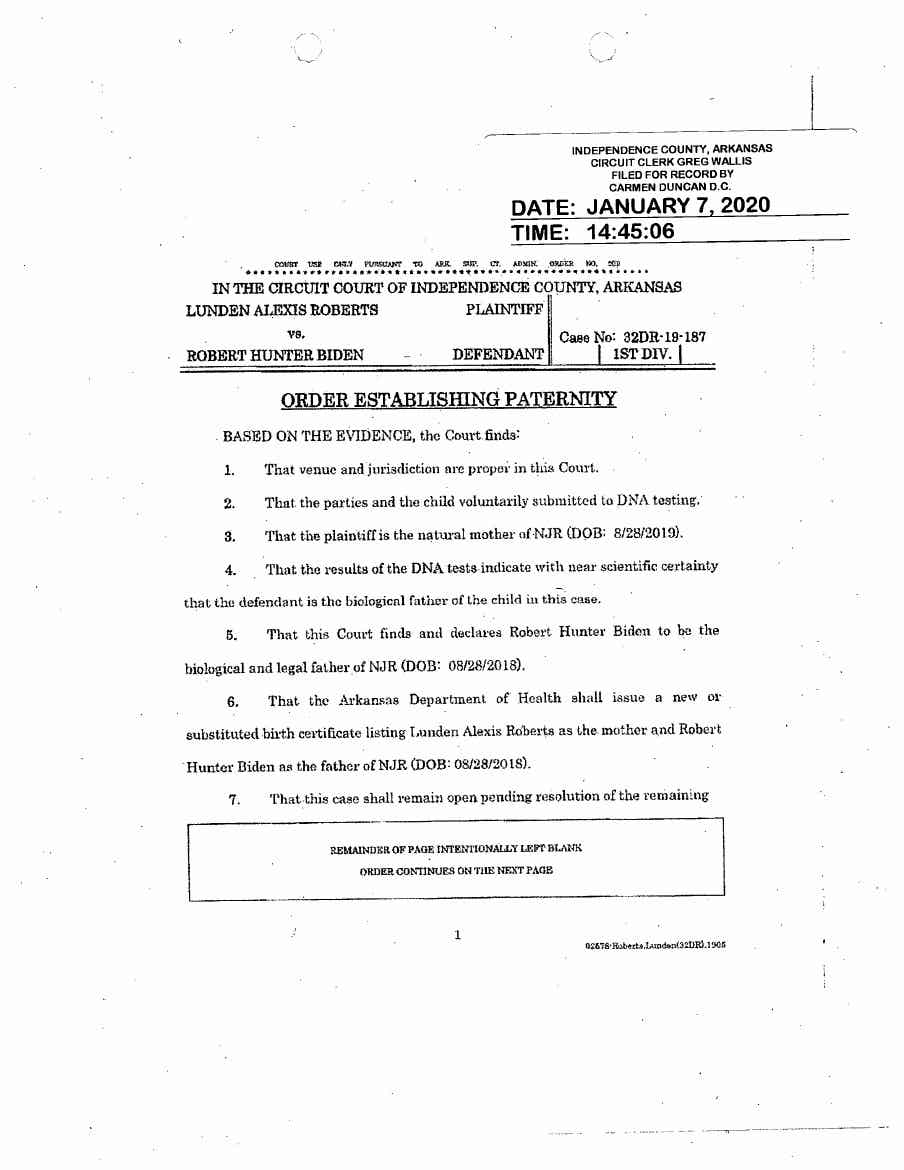 Hunter Biden was recently spotted in Los Angeles amid new developments in his personal and professional scandals.

Hunter has been laying low, prompting worldwide speculation concerning his whereabouts and the viral “Where’s Hunter?” meme. Now, Hunter has been tracked down, and his court battle in Arkansas with the mother of his unborn biological love child threatens to bring new revelations to the forefront of his national disgrace.

The Daily Mail captured him for a photograph in Los Angeles:

Robert Hunter Biden, son of Democrat presidential candidate Joe Biden, is evading a new Motion to Enforce Settlement Agreement from his ex-wife Kathleen, who claims that Hunter Biden has violated terms of their agreement. National File obtained all of the Bidens’ divorce documents ahead of the next hearing in the case on December 18 in Washington. D.C. Will Hunter Biden appear?

Here are some of the recent documents, showing numerous failed attempts to reach Hunter Biden to serve him.

Kathleen Biden’s lawyer Wendy Schwartz submitted a recent filing stating, “Please accept for filing the attached Affidavit of Service of Marshall E. Yaap stating under oath that the Motion to Enforce Settlement Agreement and October 9, 2019 Order entered by the Superior Court of the District of Columbia have been served on Defendant, Robert Hunter Biden (“Defendant”) by first-class mail, certified mail, Federal Express, email, and text message.”

Kathleen’s lawyer Schwartz writing to Hunter Biden on October 15, “Ms. Buhle is hopeful that we can resolve this matter without the need for a public court hearing.”

The Motion to Enforce Marital Settlement Agreement submitted by a Kathleen Biden attorney stated, “Defendant has breached the MSA, including without limitation Sections 7, 9, 16 and 21.”

A DNA test confirms that Hunter Biden impregnated a woman in Arkansas.