Artur Pawlowski shares the story of escaping from Poland and being ushered into Canada with promises of religious freedoms. His family was assured that Canada was a safe and free country where they would not be persecuted for their religious beliefs. After having established a business in Greece. the Pawlowski family decided to move to Canada for what they were told would be a fresh start in a free country.

Instead of the religious freedoms that they were promised, Pawlowski ended up being the first preacher in Canadian history to be arrested for preaching the word of God in a public space. Pawlowski would get harassed for his public services where he would feed the homeless by the thousands. It is against the law to feed homeless in Canada, but Pawlowski has taken it upon himself to help those who would otherwise be rejected in society.

Law officers hadn’t come in person to his Church, “until one day they did,” Pawlowski told National File. Since the beginning of the COVID lockdowns, Pawlowski has received nearly 30 tickets for violating lockdown protocols.

“We escaped to Greece,” said Pawlowski. “Canada offered us a new start, a brand new country where, the irony, they told us that our rights would be respected.” He added that he was promised, “No one would be hunting us down for our faith, and here I am defending my rights, simply for believing in church, believing in God, and opening my doors to the parishioners who want to, you know, worship God in peace.”

These include 11 tickets Pawlowski received for hosting Christmas service in December. “In December, the government of Canada announced they are cancelling tickets,” said the pastor. “You cannot have church, you cannot pray, you cannot sing. You cannot live, you are a prisoner in your own house.” Palowski had 1,000 Canadians gathered, feeding the homeless and handing out gifts as they were surrounded by swarms of armed police. After this event, Pawlowski says local police began to intimidate him at his church. “You cannot cancel Christmas, you cannot cancel God,” Pawlowski told National File.

In Polowski’s first video where he throws the  police out of his church on Easter went viral almost immediately. Over that weekend it was the most viewed video on the Internet accumulating millions of views. Polowski told National File that he believed that this would be the end of it.

“How dare you come with your uniforms to intimidate peaceful assemblies, people that are praying, people that are singing to the Lord,” said Pawlowski. “The only thing I had in my heart was telling them: Get out.” He added that he started peacefully, but when police refused to leave, “I started to intensify. I said get out, get out. Someone counted how many times I had to tell them to get out was over 30 times.”

After all the attention and all of the outreach that resulted from the first incident, Polowski believed they would not be incentivized to come back. However as we know now this was not the case. “After that, I really thought they were going to leave me alone, especially after international attention and embarrassment.” He added, “Behold, last church service, I hear a knock on the door.”

“They brought SWAT team to the church. I opened the door, and I started to talk to them, I thought, I’m not going to start with yelling.” Pawlowski explained, “They gave me this court order, they wanted to come in, I started to read this document, and this lady started interrupting me.” He explained that he told them to speak to his lawyer. “I do not cooperate with Nazis, I do not work with Gestapo.”

When the police returned it was with the company of a SWAT team as well as a woman who delivered the court order to Artur demanding:

“The Respondent, Artur Pawlowski, together with any other person at the property shall grant access to any Executive Officer in order for him or her to attend at the Property without notice, during the hours of 8:00 a.m. to 8:00 p.m., to allow the Executive Officer to exercise his or her powers under section 59 of the Act.”

The purpose of this court order is to navigate around the Canadian criminal code which prohibit the interference of a clergyman or a religious service.

The cart order also permits law enforcement to arrest Pawlowski or, ” any other person refuse to grant any Executive Officer access to the Premises or hinders or interferes with the Executive Officer in the exercise of his or her powers.” 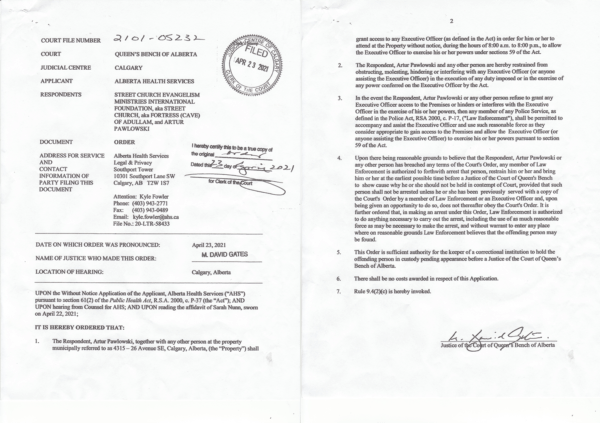 This court order grants not only the arrest of Pawlowski and anyone who stands by him without a warrant, but gives the police permission to go wherever they believe Pawlowski might be, including his office or home.