MSNBC host Joy Reid went on an unhinged Twitter rant yesterday where she slammed Americans for wanting to preserve “human rights and civil liberties,” describing her belief that “human sacrifice is right there in the Old Testament…”

Leftist MSNBC host Joy Reid believes that Americans are mistaken for wanting to preserve their “human rights and civil liberties” when it comes to the US government mandating Americans to wear masks, or be injected with the COVID-19 vaccines, both of which do not prevent individuals from catching or spreading coronavirus.

This weird thing has happened in the world during the pandemic: people of the far right (including governors and judges all the way up to SCOTUS) and even non-right wingers, have developed a philosophy that amounts to granting the coronavirus a “right” to proliferate and spread…

During a deranged Twitter rant yesterday, Reid detailed those beliefs, also stating that “human sacrifice is right there in the Old Testament,” prompting a liberal “Christian” who joined in on the discussion to admittedly “reconsider paganism.”

Surprise!! Also human sacrifice is right there in the Old Testament…

‘HAVE A MARGARITA’: Psaki Instructs Americans To Go Boozing If Upset With Biden’s Presidency

Despite the fact that mask-wearing and COVID-19 vaccines definitively do not prevent the spread of coronavirus, Reid falsely claimed that “people of the far right,” governors, judges, the Supreme Court, and “even non right-wingers” who do not support mandates wish to grant the virus a “right” to “proliferate and spread.”

This weird thing has happened in the world during the pandemic: people of the far right (including governors and judges all the way up to SCOTUS) and even non-right wingers, have developed a philosophy that amounts to granting the coronavirus a “right” to proliferate and spread…

such that ANY attempt by government to impede the natural proliferation of this virus: whether by mandating masks or proof of vaccination or even testing, is viewed as a fundamental violation of human rights and civil liberties. I mean this seems to be the SCOTUS majority view…

And it definitely seems to be the view of Republican governors; that NO governmental or even private action may be taken to stop the coronavirus from spreading; that it MUST be allowed to spread “naturally,” and that the only allowable course is treating the resulting illness.

Did Reid just convert a leftist to Paganism?

To Reid, the possibility of using treatments other than the controversial COVID-19 vaccines, which she dubbed “snake oil,” are at issue, because the companies that produce them make money and internet personalities “profit” from spreading word about them.

It appears that Reid did not take into account that Big Tech companies, such as YouTube and Facebook, frequently ban internet personalities for spreading what they call “misinformation” about coronavirus, thus severely impacting their audience outreach and hindering profits.

And the fact that the treatments — both the genuine ones and the quack “miracle cures” — happen to enrich particular corporations and create opportunities for Youtube gurus, Facebook and TikTok marketers to profit from snake oil mania is far from incidental. It’s a viral circus!

This, according to Reid, amounts to “a money maker in both sides of the pro-vax/anti-vax aisle.” Instead, Reid appeared to suggest that vaccine-manufacturing Big Pharma companies should be the sole entities profiting off of COVID-19 treatment.

And yes, the Big Pharma companies who make the vaccines are raking in profits too. The vaccines may be free to you but they’re not FREE. So it’s a money maker in both sides of the pro-vax/anti-vax aisle. Equal opportunity capitalism with just a few million bodies along the way!🎉

‘HAVE A MARGARITA’: Psaki Instructs Americans To Go Boozing If Upset With Biden’s Presidency

Reid then claimed that “unvaccinated COVID sufferers” are “collapsing” US healthcare systems, despite the fact that many healthcare facilities have fired staff for not being vaccinated.

But what’s not taken into account by these “pandemic libertarians”— these governors, or the right wing SCOTUS majority, conservative judges or right wing media — is the very real threat of unvaccinated COVID sufferers collapsing our state healthcare systems. They just don’t care.

They ignore the millions of deaths which they seem to view as “natural” and thus acceptable, because they mainly occur among the physically weak, elderly or otherwise infirm. Their bottom line seems to be: you cannot protect public health. Ever. Those weak people aren’t worth it.

In fact, some hospitals had previously dropped the mandates because they “have been a factor constraining the supply of healthcare workers, according to hospital executives, public-health authorities and nursing groups.”

Reid then appeared to refer to the economically devastating nationwide coronavirus lockdown, which some have said resembles martial law, to a “brief pause on capitalistic activity.”

She further complained that people don’t want to wear uncomfortable masks or be injected with a controversial substance, both of which do not prevent them from catching or spreading COVID-19, adding that it “truly baffles” her that people would refuse to do such things.

It’s a philosophy that makes millions of dead people-even including children; and the shattered lives of loved ones left behind, preferable to even a brief pause on capitalistic activity or the inconvenience of a piece of cloth over your nose for a short time or taking a vaccine.

It’s a philosophical embrace of absolute self-absorption; placing personal convenience ahead of any sense of the public good. Even worse, it demands that government STAND DOWN and stop fighting the virus. It must instead be let in at any cost, so that “freedom” & profit prevail.

With the stipulation that I have lived long enough to outgrow the capability of surprise; this new philosophical trend, which crosses the right-left and even the racial divide, truly baffles me. But it does explain how a zombie apocalypse could EASILY happen. God help us.

One user on Twitter did not take Reid’s unhinged comments lightly, responding to the rant by saying “Imagine being this psychotic. The coronavirus doesn’t have rights. People do. People have the right to do whatever the fuck they want. With coronavirus. Without coronavirus. It doesn’t fucking change the standard. You pieces of shit.”

“WHATEVER they want? Let’s unpack this. Does a person who has contracted the ebola virus have a right to get on a plane? Does someone with TB have the right to cough in your face? Why do people get arrested for spitting in peoples’ faces or biting them? Per you that’s their right,” Reid responded to the user.

Then, a so-called “anti-fascist” leftist user joined in on the debate, accusing American Christians of human sacrifice for not being okay with forced vaccination.

“I used to think that we Christians were opposed to human sacrifice. I thought that was one of the founding principles. In the last two years I’ve learned that the “Christians” are willing to sacrifice the old, the infirm, & the young to the god Mammon. It’s been disillusioning,” she said to Reid. 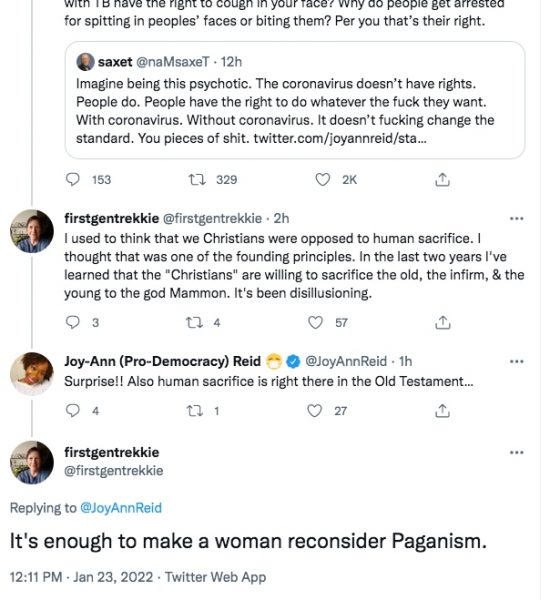 This, according to the leftist Twitter user, was “enough to make a woman reconsider Paganism” – a belief system historically known for involving human sacrifice.