Leftists have claimed that the London Bridge terror attack on Friday was a false flag operation by the Conservative government in order to help them win the upcoming general election.

“False Flag” trended on Twitter on Friday, shortly after a terror attack on London Bridge left the capital reeling once again. Usman Khan, 28, started the attack at a Cambridge University conference on the rehabilitation of prisoners, before moving out to London Bridge. Khan was surrounded by members of the public who held him down before he was shot by police. Two members of the public died, with one being named as Cambridge graduate Jack Merritt, and another three were injured.

Many on the political left decided that this clearly had nothing to do with Islam, despite the fact that Mr Khan was convicted of a terror offence in 2013, but was in fact simply a false flag, set up by the Conservative government to distract people from their election campaign:

Tories doing a false flag to swing the election aye?

As soon as the BBC say our journalist just happened to be on London bridge when shooting started , i think false flag

It’s about time the brits woke up and smelt the coffee, clearly a staged attack just before the GE #FalseFlag

I’m hearing folk saying this London Bridge attack was staged, a false flag! Though I don’t know much about this attack and only getting bits of news, but if ever there was a day Boris Johnson needed a little help, today would be that day after his and his dads performances on Air

I always find terrorism from a restaurant window in perfect view during an event interesting. I’m sorry. I burst out laughing at end. That looks like some Benny hill bullshit right there. I used to work in film & I’m going to say hell no. That’s a very obvious false flag. https://t.co/HC1d0gPAnW 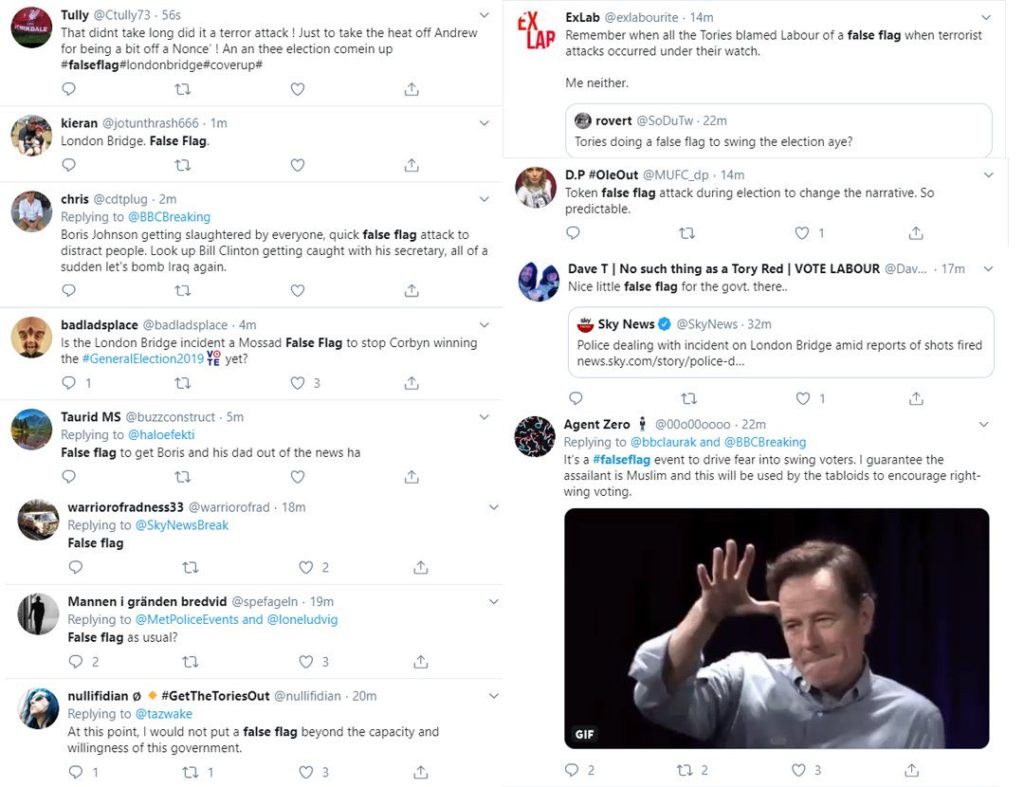 Their comments were echoed by users in a thread in one of the largest pro-Labour Facebook groups, “Jeremy Corbyn Leads Us to VICTORY” – at the time of writing, they currently have over 23,000 members. One user said that they had “just seen footages [sic] of the incident on the bridge don’t see no blood on the knife very convenient no need to kill him He had his back to police on the floor 🖕🖕🖕 saved Boris from scrutiny like the last one save MAY from scrutiny 🖕🖕🤥🤥🤥🤥 JC4PM.”

Another user said it was “convenient that there’s something to detract from all the Tory crap that’s going on.” Someone else posted a meme of Prime Minister Boris Johnson speaking into a phone, saying “MI5? It’s time to arrange a false flag terror attack so I can talk tough on terror.”

Many were disgusted by their suggestion that the government had killed their own citizens:

Simply search “false flag” and you’ll get all the tinfoil hat Corbyn-nutters rambling on about a government/ Tory set-up.

Anyone who thinks this is a “false flag” operation to help the government would do well to recall that there were two terrorist attacks in 2017 and they helped the opposition with its police cuts narrative. Do us all a favour and put a sock in it

I think those people saying the terror attack on London Bridge is a ‘false flag’ to help the Conservatives with the general election campaign should take a long look at themselves and phone their therapist to rebook an appointment.

Serious question but why have all the tweets saying today’s terror attack on London Bridge is a #FalseFlag got labour roses 🌹 or EU FBPE in their bio?
Some of you guys are delusional & extremely brainwashed & if I’m honest it isn’t a cool look.

The prize tinfoil hat is reserved for one special user, who circled back around in their conspiracy theories, claiming that those who were claiming the London Bridge attack was a false flag, were in fact, secret right-wingers, and wanted to make the left look bad!

I see very few actual #FalseFlag tweets from the “left” and many many tweets condemning such a statement from the “right”!!

One would be inclined to believe that the “right” started this hashtag to suit their own narratives and use it as a Corbyn bashing opportunity!!

This was the first terror attack in London since 2017, but it certainly won’t be the last.