Republican Illinois Rep. Adam Kinzinger’s office offered an internship to a Russian immigrant beauty queen who met Kinzinger through her internship application. She then dated Kinzinger for about four months and sent Kinzinger racy photos at his request, according to extensive communications between the woman and a NATIONAL FILE source. The woman, Olga Kambod, provided sexually charged and volatile 2018 text messages between herself and a phone number that matches Kinzinger’s former phone number on publicly available records. Kambod also provided emails from Kinzinger’s congressional staff discussing internship duties.

Rep. Adam Kinzinger, a frequent critic of the America First movement, became angry at Olga Kambod after she accused him of suffering from “low levels of testosterone,” according to messages Kambod provided to our source. Kambod did not end up serving as an intern for Kinzinger. Olga Kambod was subjected to an over-the-phone intimidation campaign including from a caller who identified himself as “Capitol Police” to silence her about her relationship with the congressman after Kinzinger began dating his current wife, according to Kambod.  “In my opinion he doesn’t respect women,” Olga Kambod confided to our source.

Olga Kambod, who reportedly graduated from law school and worked for a criminal defense attorney, was recently in the news for surviving an acid attack that left permanent scarring on one side of her face. Olga Kambod, who has a public Facebook page and also a personal Facebook profile on which she posts as “Olga Alexia,” provided extensive information and documentation to NATIONAL FILE’s source to verify her identity.

Olga Kambod told our source that she met Kinzinger around February 2018 when she applied to be his intern.

“We met in February or so when I applied for internship in his Ottawa office. I wasn’t his intern but we started personal contact. I saw him last time in October in Dixon,” Olga Kambod said, noting that she did not fly in Kinzinger’s plane but used United Airlines to fly to his location to meet him.

“Not to be pushy but Did you guys get close enough to say you had a relationship?,” our source asked, to which Kambod replied “Yes that’s why it hurts.” Asked if she thought Kinzinger used her, Kambod replied, “I think he was choosing.”

Our source asked Kambod if Kinzinger ever gave her any gifts. Kambod replied, “No just flowers and some dining together. we were dating just about 4 months.”

“I think he liked me mostly because I was calling him my Lord, my King, Congressman of my heart and my soul, and things like that… He enjoyed that he is much higher than me, he loves to feel powerful,” Olga Kambod said.

“He asked for you to send racy pics of yourself? Did you?,” our source asked.

“Yes unfortunately I did I sent a few I am sure he didn’t date anyone else at that time because he texted me early in the morning or before he fell asleep,” Olga Kambod said.

Olga Kambod provided messages with Kinzinger in which the congressman requested a racy photo of Kambod. Kinzinger said, “I didn’t see one without underwear.” Kambod then sent Kinzinger a photo, which she chose to redact in her conversation with NATIONAL FILE’s source. 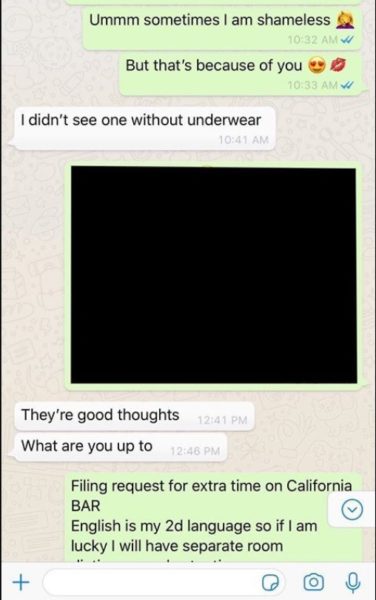 OLGA SAYS SHE LANDED THE INTERNSHIP OFFER WITH KINZINGER’S OFFICE 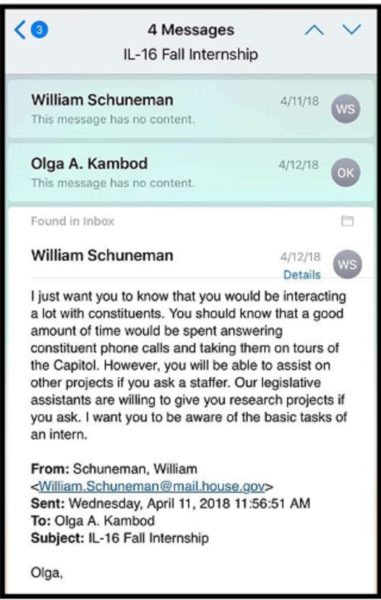 CONGRESSMAN KINZINGER BECAME ANGRY AND PARANOID, ACCORDING TO MESSAGES PROVIDED BY OLGA

MAY 1, 2018: Olga Kambod provided a conversation between herself and Kinzinger in which the congressman was angry at Kambod for accusing him of having “low levels of testosterone” in a thinly veiled Instagram post about him. The angry conversation between an insulted Kinzinger and an apologetic Olga Kambod occurred on May 1. By this time, Kambod had already discussed her prospective “Fall Internship” with Kinzinger’s Washington, D.C. office. 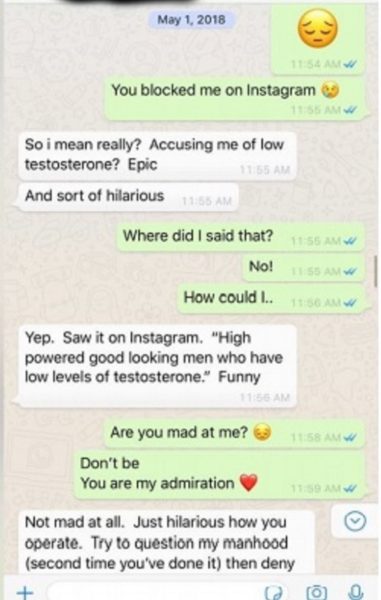 In May 2018, after she insulted Kinzinger by accusing him of “low levels of testosterone,” Olga Kambod received an anomymous letter from Washington, D.C. telling the Russian-born beauty queen to “leave him alone.”

Olga Kambod said: “We didn’t talk about politics that much. Kinzinger is very careful person, he is suspicious about everyone. He requested my ID, proof of US citizenship and someone (I think it was him) called to my law school and asked about me. In May I received anonymous letter – somebody was telling me that if I really in love with Kinzinger I should better leave him alone. The writer was saying that I might be a damage for his re-election campaign because I am naturalized citizen of US, I was born and raised in Tatarstan Republic (part of Russia) and with Red Sparrow movie, Maria Butina scandal etc… media may project him as a two-faced or hypocrite.”

“I was so sad and immediately messaged him about the letter. But he just became cold and gradually distanced himself from me. I didn’t expect that…He became kind of aggressive with me. I think he liked me but he loves his career more…I think my nationality was a problem for him…I think he is corrupted and thirsty for money and power,” Olga Kambod explained.

Olga Kambod verified her identity by providing proof of her $200 donation to Kinzinger for Congress, which she made on June 28, 2018. 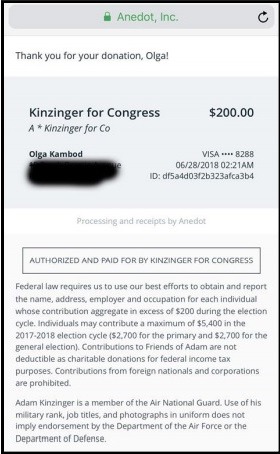 Olga Kambod said that she was harassed by another woman in the summer of 2018. The woman was apparently jealous of Olga’s relationship with the Illinois congressman. Olga Kambod noted that “Kinzinger has a lot of beautiful girls in Washington DC.” Olga said the other woman “called me names a lot in summer” and “Kinzinger said he doesn’t know her. But she was so angry so I don’t believe that they don’t know each other.”

Olga Kambod provided the conversation in which Kinzinger broke up with her. 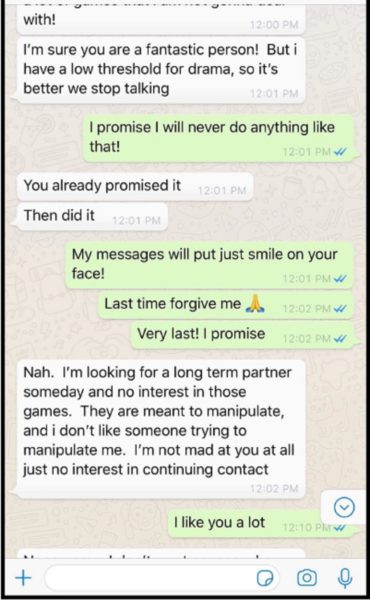 Olga Kambod lamented to our source that “He is very good looking on Instagram but in real life he is average” and said “He is 5’9… Not a tall guy.” Olga Kambod noted, “No he is not a gay, I am sure. I met with his staffers who work for him in Washington DC and Ottawa. They seems like normal, straight, young men. In my opinion they look a little bit sloppy. I know many of them have long term relationships with girls. One of his staffers in Ottawa got married in September.”

Olga Kambod never served her internship in Kinzinger’s office. Olga Kambod posted on Facebook on December 17, 2018 complaining about a congressman that she had a romantic relationship with.

IN DECEMBER 2018, OLGA KAMBOD SAID SHE RECEIVED PHONE CALLS FROM WASHINGTON, D.C. AND FROM CHICAGO, ILLINOIS, WITH THE D.C. CALLER IDENTIFYING HIMSELF AS ‘CAPITOL POLICE’

On December 29, 2018, Olga Kambod wrote to our source: “Can you believe it – I just received a call from Capitol police. Kinzinger ask the officer to call me and demanded me to remove screenshot of his ‘testosterone’ text messages.” Kambod added “He is afraid” and later said, “Kinzinger really scared me” with the phone call.

“I am so mad right now! He didn’t have a problem to text me about his manhood and a lot of messages like that BUT ask me to remove it he needs to use a Capitol police. I just crossed his number. I told the officer that I suggested Kinzinger to sign an agreement of non disclosure but he refused besides he never mentioned that our communication must be private,” Olga Kambod said.

Also on the night of December 29, 2018, Olga Kambod said, “An hour ago I received a call from Illinois Someone asked Are you Olga I said yes and the person disconnected I am CA resident so it’s so weird.”