President George W. Bush’s largely failed War on Terror resulted in the displacement of 37 million people, likely jump starting the refugee crisis that has wreaked havoc on the West and changed the demographics of many European countries in a few short years, according to a new study published by Brown University’s Costs of War project. President Donald Trump is now bringing American troops home from many of these costly engagements.

The study authors explain that, since President Bush announced the War on Terror in the days after the terrorist attacks on September 11, somewhere between 37 million and 59 million people were displaced and largely made their way to Europe as collateral damage from the ensuing wars.

“Using the best available international data, this report conservatively estimates that at least 37 million people have fled their homes in the eight most violent wars the U.S. military has launched or participated in since 2001,” the authors explain. “Ultimately, displacing 37 million—and perhaps as many as 59 million—raises the question of who bears responsibility for repairing the damage inflicted on those displaced.”

After the United States invaded Afghanistan in 2001, many of those displaced by the conflict ultimately resettled in Germany or Canada. After the invasion of Iraq in 2003, many went to Syria. When Syria would later become a theater of the conflict, refugees fled to Germany and to Lebanon. When the Obama administration bombed Libya, refugees fled to the United Kingdom and Germany. 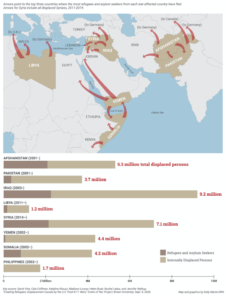 The researchers also found that more people have been displaced by the War on Terror than any other war in modern history, dating back to 1900, with the notable exception of World War II. The study does note that “25.3 million people have returned after being displaced,” but this could pale into comparison to a less conservative total number that could be “closer to 48–59 million.”

Brown University’s Costs of War researchers also note that over 800,000 people have died due to direct war violence, and the total U.S. government price tag for the war now stands at $6.4 trillion.

President Trump is working to end many of these conflicts and military occupations, having recently pledged to remove virtually all American soldiers from Afghanistan before the November election. The total number of troops remaining in Afghanistan would be around 5,000.

Still, foreign policy experts heralded by the media condemn the president’s decision to end the costly wars. H.R. McMaster, the president’s former national security advisor, says the move is “unwise” and will make the United States less safe from the Taliban.