Guangxin is a former officer in the Chinese army and is the richest person in China’s embattled Xinjiang province. GH America Energy is a subsidiary of Guanghui Energy Company, based out of Shanghai, where Sun Guangxin owns a controlling 44% stake, according to Market Screener.

Late last year, Del Rio Mayor, Bruno Lozano, wrote to federal officials close to the matter, “We believe that this project and all future projects of a similar nature will result in unacceptable risk to national security of the United States.” 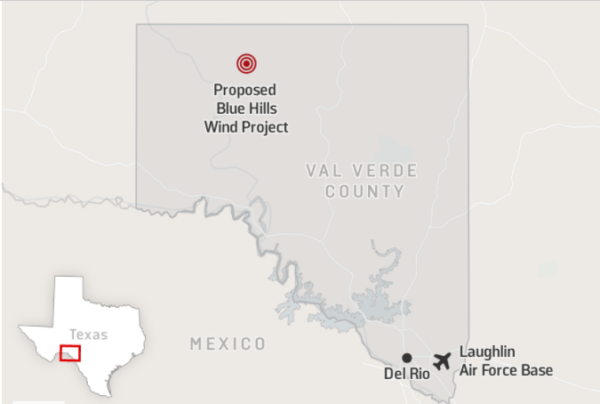 According to a 2018 release from Laughlin Air Force Base, their flight training wing provides over 2800 jobs to the local economy. It also produces 350 new pilots every year. But this program may be in jeopardy due to the Wind Farm’s construction and daily operation.

A combination of radio interference, signal transmission, and even physical obstruction make performing these flight trainings more difficult. Furthermore, the project has potential to hinder access to electricity and water gotten from the local river, which would cripple operations at Laughlin Air Force Base if it were to be attacked or sabotaged in any way.

Former Congressman Will Hurd weighed in at ForeignPolicy.com, “Why are we allowing a Chinese company to do that in the U.S.? A former U.S. general would not be able to do this kind of project in China.”

Hurd expanded on the threat to Texas Public Radio by adding that, “once the owners of the West Texas project named Blue Hills Wind becomes part of the power community, they will gain access to security industry alerts, private industry insights and national security threat assessments.”

Last week, much of Texas was gripped by historic low temperatures, resulting in deadly power outages that affected roughly 4 million people. These outages are widely reported to be the result of an over reliance on wind turbines by Texas’ energy grid, run by the Electric Reliability Council of Texas (ERCOT).