While CNN and a collection of mainstream media sources recently claimed to public photos of President Donald Trump’s iconic airplane in a state of disrepair at an airfield in New York, the 45th President released a statement revealing the plane is in the process of being restored and upgraded and will soon return to its position as a centerpiece of upcoming Trump rallies.

On March 19, CNN published an article that appeared to celebrate the state of disrepair President Trump’s iconic “gold-plated” jet fell into during its years of disuse during the 45th President’s time in office. “One engine is missing parts. The other is shrink-wrapped in plastic. The cost to fix and get it flyable could reach well into the high six-figures, a price-tag Trump doesn’t appear to be dealing with right now,” reported CNN.

It appears the left leaning cable news outlet was wrong, as President Trump revealed in a statement that the plane is in the process of undergoing serious repairs and upgrades in an effort to make it ready for what is bound to be a protracted 2024 election. “Many people have asked about the beautiful Boeing 757 that became so iconic during the Trump rallies,” noted President Trump. “It was effectively kept in storage in Upstate New York in that I was not allowed to use it during my presidency.”

“It is now being fully restored and updated and will be put back into service sometime prior to the end of the year. It will soon be brought to a Louisiana service facility for the completion of work, inspection and updating of Rolls-Royce engines, and a brand new paint job. When completed, it will be better than ever, and again used at upcoming rallies!” 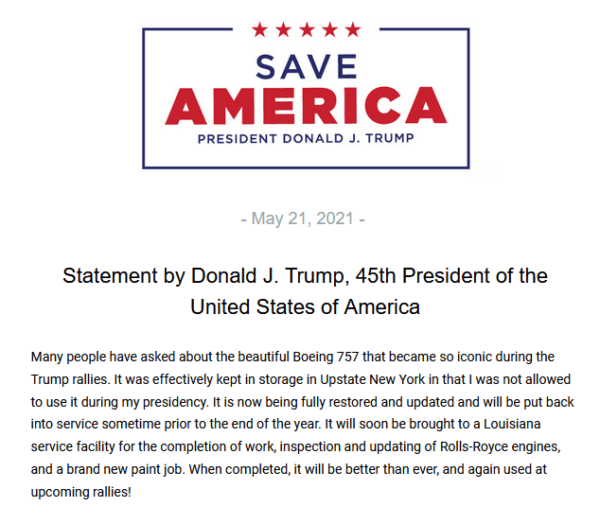 President Trump recently revealed that he plans to resume the iconic Trump rallies that swept the nation in 2016 as early as this month, and will make an official decision on whether to run for President in 2024 after the 2022 midterm elections. Sources tell National File that President Trump is expected to exert his influence in the Republican primaries going into 2022, with the goal of electing America First politicians who will carry out his agenda in the U.S. House.