45th President Donald Trump has released a statement slamming Joe Biden for his disastrous Afghanistan withdrawal, noting that new reports suggest only 4,000 of the 37,000 people evacuated from Afghanistan are American citizens, with the rest being likely refugees who will now be settled throughout the West.

“You can be sure the Taliban, who are now in complete control, didn’t allow the best and brightest to board these evacuation flights. Instead, we can only imagine how many thousands of terrorists have been airlifted out of Afghanistan and into neighborhoods around the world. What a terrible failure. NO VETTING. How many terrorists will Joe Biden bring to America? We don’t know!” 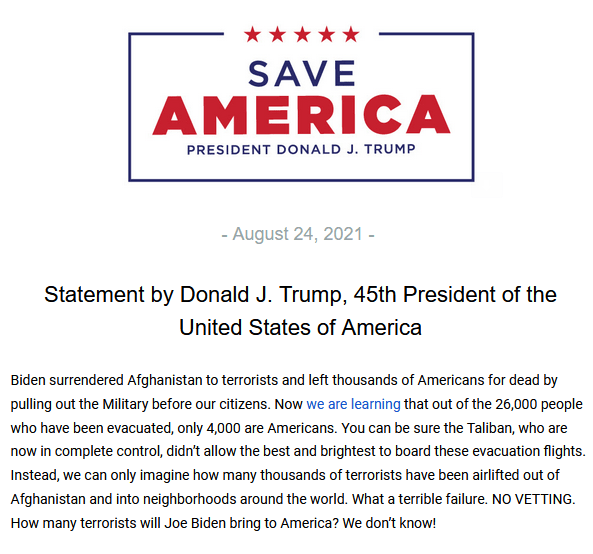 Today, multiple establishment media reporters have noted that a leaked State Department cable with evacuation numbers as of yesterday reveal that only a total of 4,407 American citizens have been evacuated by the Biden regime, while 21,533 Afghan nationals have been air lifted out of the country via the embattled Kabul airport. These numbers contradict Biden’s repeated claim that 37,000 people have been evacuated from Afghanistan, with the total coming to 26,582.

Am told the Biden Administration, on noon (eastern) briefing call for lawmakers, estimated that 4,000 Americans have been evacuated from Afghanistan.

In one of the latest steps of this bungled withdrawal, the Biden regime leaked to establishment media that it was considering air strikes to destroy the military equipment left in the country by the United States during its hasty withdrawal, but feared a hostile response from the Taliban. Many noted that these reports will give the Taliban ample time to relocate and secure any equipment they view as valuable.

President Trump has repeatedly reminded Americans that his plan would have seen American citizens evacuated from the country first, then American military equipment and bases removed or destroyed second, and finally, a full military withdrawal when no Americans or American assets were left in the country. Biden, however, removed the military first, is now attempting to evacuate the citizens, and is seemingly leaving the billions of dollars military equipment and installations for the Taliban to use as they see fit.