Former President Trump was formally reinstated by Twitter on Saturday evening after Elon Musk put the matter up to a simple, yes-or-no Twitter poll. The poll — which ran from Friday through Saturday evening — received a little over 15 million votes, with “yes” pulling out a narrow victory with 51.8% of the total. 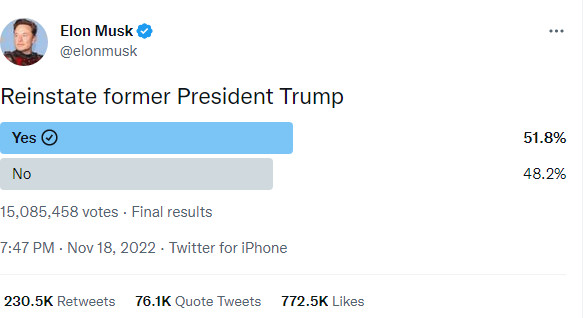 Former President Trump has yet to confirm whether he will return to his iconic “realDonaldTrump” account now that he has formally been reinstated. America’s 45th president has stated in the past that he will stick with his own social network, TRUTHSocial, but it remains to be seen whether that will change.

The move came just a little over a day after Musk refused to commit to bringing Trump back after a number of previously banned users were formally reinstated. The tech mogul has frequently stated that he views Twitter as a “digital time square” and does not believe in permanent bans, though he has admitted that “hate tweets” will be “deboosted,” as in their reach will be limited.

These admissions have prompted many questions directed towards Mr. Musk, with several comparing it to the practice of shadow banning. Others have asked for a clear definition on how “hate tweets” will be defined.

Speaking to Trump’s Twitter ban specifically, Musk had previously stated that the former president would be reinstated.

Trump was previously banned from Twitter by the recently fired former head of the company’s trust & safety, Vijaya Gadde, over accusations of “inciting” violence on January 6, 2021. The company had for years become notorious for one-sided, politically motivated terms of service enforcement by the time Trump was banned.

Numerous authoritarian heads of state — including representatives of the North Korean and Iranian governments — were allowed to remain on Twitter while Trump was barred.

A recent bombshell report from The Intercept revealed that Gadde held regular meetings with the Department of Homeland Security (DHS) in order to combat the “spreading of misinformation.”

RELATED: CBS News to Stop Using Twitter Out of An ‘Abundance of Caution’